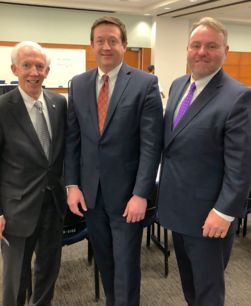 LANSING,  AUGUST 2018 - Attorney Christopher Wirth has been elected to represent the 20th Circuit on the Representative Assembly of the State Bar of Michigan.  The Representative Assembly is the final policy-making body of the State Bar of Michigan (SBM).  The SBM is the self-regulating and licensing body for all Michigan licensed attorneys. Representatives are elected by the membership of the SBM to 3 year terms from each of the Michigan Court Circuits.  The number of representatives from each Circuit is determined based on population size.  The 20th Circuit is comprised of Ottawa County, and elects two representatives to the Assembly.  Chris was appointed by the Assembly to fill a vacancy in April and was then elected in August to a full 3-year term of the position.   Chris is joined in the photo by 2018 SBM President Donald G. Rockwell (left) and 2018 Assembly Chairman Joseph P. McGill (right).